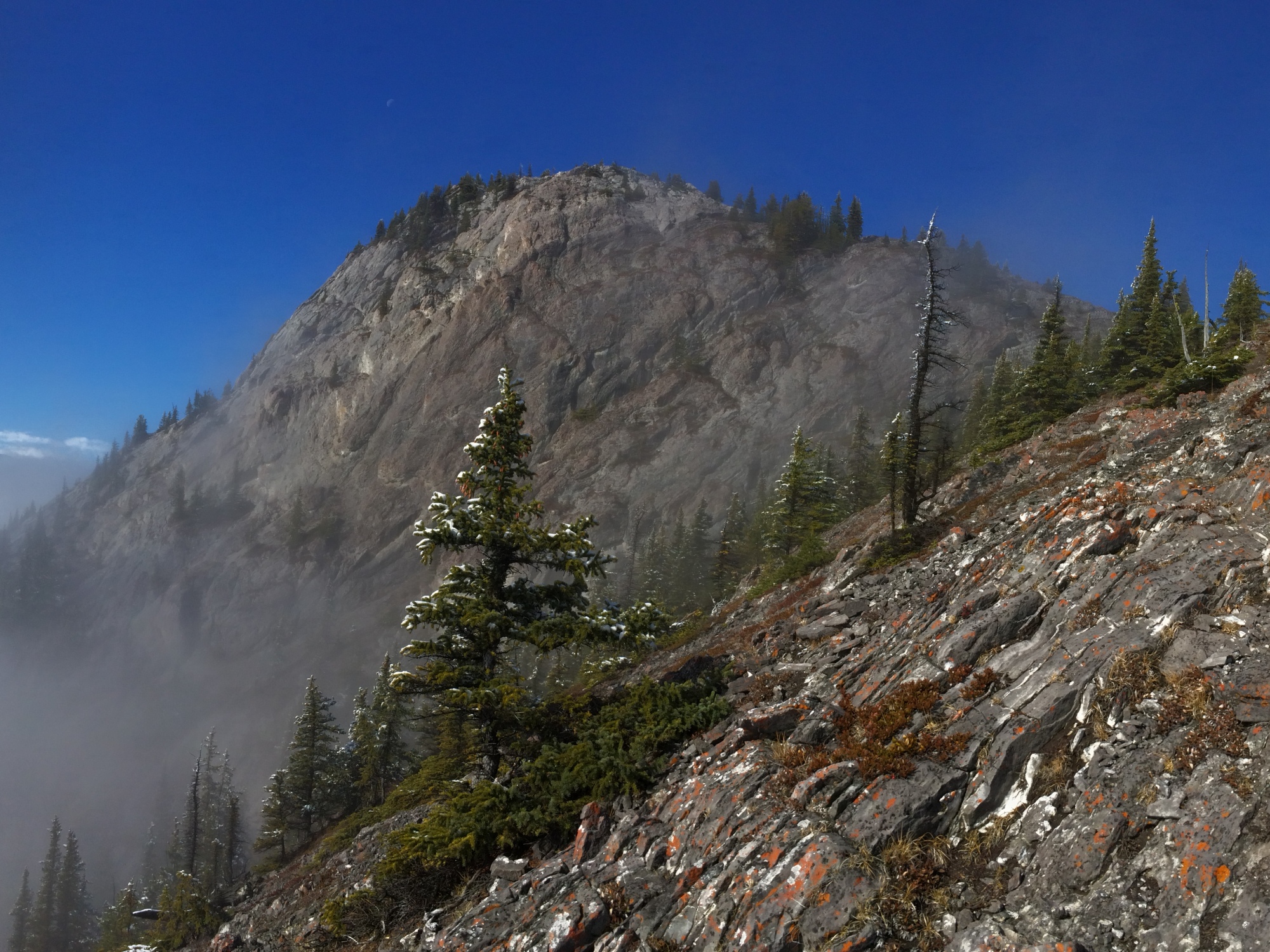 We did this hike Sunday, October 4, 2015. Present company was Sandy, Curtis, and me. The weather forecast for Calgary was a scorching 5C and Banff had a forecasted 8C. We were optimistic that it would be a nice day, but it sure didn’t start out nice.

Decked out in somewhat winter attire (long underwear, long pants, sweater, coat, toque, neck warmer, and gloves), we started on the trail. It was a nice, brisk walk through the forest. There were lots of fallen trees and what appeared to be burnt trees. After less than a minute of walking, we came across a Y intersection. Without thinking, we went left (wrong way) and 5 minutes later, discovered that we should of taken the right path. We backtracked and went on the correct path but soon regretted it as the path came to a steep hill (it was probably about a 75 degree incline in most areas).

Up we went. From the time we reached the start of the hill (less than 5 minutes into the hike) to the time we reached the summit, it was a steady climb up with no real flat spots (unless you count vertical being flat). The clouds were hanging low in the valley, which hindered any kind of scenic view. We climbed on the ridge for about 3-4 hours; going up the entire time. There were some areas where it was a small scramble between crevasses, which was fun, and there were some areas where it was just up….and up…. and up…

When we neared the saddle, the clouds started to burn off and for the last hour of the hike up, the sun shone through and started to cook us. It was an odd feeling because not 5 hours ago, we were freezing on the trail. The clouds still hung low in the valley, so we snapped some pretty nice pictures of the peaks of the mountains poking out of the clouds.

We reached the saddle which had a spectacular view of the Lake Louise valley to the North. We stopped here for a few minutes and decided to go to the cap (to the left). The cap is an interesting point as it is at the very corner of where the Lake Louise valley meets the Banff valley. You are standing on the corner of a mountain range looking across the valley to another mountain range; I am sure there is a word for this…

The cap had a small metal structure from a geological survey. The brass marker was weathered so we couldn’t make out what it said (at least not very well). We decided to have some hot chocolate that I carted up to the top, but quickly realized that I forgot the propane tank at home (I have a small burner and pot that we were going to use). So I built a small fire and tried to heat the water. With the snow, it was hard to find dead-fall that wasn’t soaked, so this proved to be nearly impossible. We had lukewarm hot chocolate.

The way down was almost just as challenging because it was so steep. The sun had come out in full force and was quite warm. It dried up any wet spots on the trail giving way to dry, dusty steps. We snapped a few pictures at the scenic points that we marked in our memory on the way up and kept going.

When we got back to the car, our GPS said we travelled a total of 4.8 miles and took 6 hours and 54 minutes to complete. This also takes into account the wrong turn and the hour break at the top.

It’s a very steep hike but the views are rewarding. I would recommend leaving early and taking your time. If you choose to do the Summit and not the cap, give yourself lots of time. It was about another 2-3 hours to the summit from the saddle.