We did this hike Saturday March 12, 2016. It was our first hike of the season. Present company: Sandy, Curtis, and myself.

This was the hike I was supposed to do last summer but got started on the wrong path and ended up doing the Baldy saddle.

We got an early start and were the second vehicle in the parking lot. It was a bit cool to start (the ground was still frozen), but it was going to be a warm day. The trailhead was on the other side of the highway, and once you cross, it’s a nice forest walk for the first 2km.

As the trail continues on, the sides of the mountains start to push inwards until you are practically walking in a ravine. From there, you start the ascent upwards to the pass. We made it to the pass and stopped for a quick break. We were passed by a nice couple from Red Deer who were definitely moving at a quicker pace than us.

We trudged onwards to the summit (didn’t quite make it). Up until this point, the trail had been mainly over ice, so our great Kahtoola spikes really helped a lot. These spikes dug in to the ice quite nicely and prevented me from sliding any which way. I will be using more of these on our Spring hikes.

By this time, we were all getting tired. Our muscles weren’t used to hiking (even though we did snowshoeing in the winter). We stopped for lunch in the forest as the wind had picked up a bit. It was this point where we decided that we would come back and do the summit when two things happened: 1. We had a few more hikes under our belt for the year and 2. there was no more ice. The rest of the way up was snowy and could be icy. Only Curtis and I had spikes, Sandy was not so fortunate.

On the way down, we took a detour through a snow covered slope. It was here where I decided that going down on my feet was just too much work so I slide down using my feet for brakes as well as steering. My hiking pants must have caught a branch or something and ripped open my pocket containing my car keys (the pocket was securely shut otherwise). I didn’t notice and so we kept going.

Once back to the car, I went to open my liftgate and nothing was working. I tried the doors and nothing… It was at this point I realized my keys were no longer in my pocket and fell out on the mountain. After a few frantic phone calls to friends back in Calgary to bring my spare set, we sat and waited for help to come. The lights on my car started to flash and we all looked up to see the same hiking couple that passed us, walking down the parking lot with my keys. They had followed our same trail and the guy fell in the same spot that my pocket ripped and landed on my keys. We were very lucky that someone had found them.

It’s not a hard hike at all. It’s rated intermediate but when the snow is gone, I am sure it would be on the upper end of easy. I will be coming back to this one in the summer to finish. 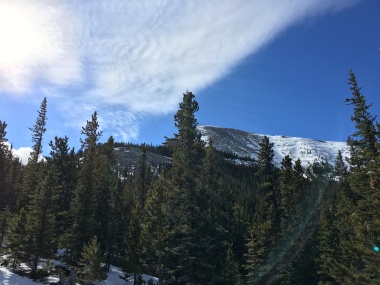